Cuba is not India or China, I know. You may think it’s quite similar to Europe. After all it was established by Europeans (after they killed all the Cuban Indians of course). And it’s true. 65% of the population is white and 60-70% of the people are considered Catholic. However I could still find some differences between Cubans and Europeans. Especially in the small things.

When I went to Cuba I thought Cubans weren’t really nice to each other. They would never use words like “please” or “thank you” in the shops or bars. They simply say “give me 2 beers”. I found it quite rude at the beginning. Until we came to Poland and Fidel helped an older lady to get off the bus. She said nothing. Then I realized that maybe Cubans are not that polite in shops and bars like we are, but when you help somebody and they do help each other, people appreciate it.

In Cuba people talk to each other all the time. They stop on the street and have a chat with people they don’t know. They know their neighbors. We’ve been living in Krakow for few months now and we’ve met one neighbor. And only because we accidentally flooded her apartment. That’s sad I must say and can’t wait to move back to Cuba to be surrounded  by Cubans again.

Cubans are so use to live withour money that they just don’t worry that much about the finances. If you have a place to stay (and I must say, in Cuba there are almost no homeless people) and a plate of rice every day you are happy person. If they have 5 pesos today, they will spend it and worry the next day. I don’t think that we, Europenas can do it. We live for work and money and sometimes we don’t enjoy life as much as we could. Something to learn from our Cuban friends. 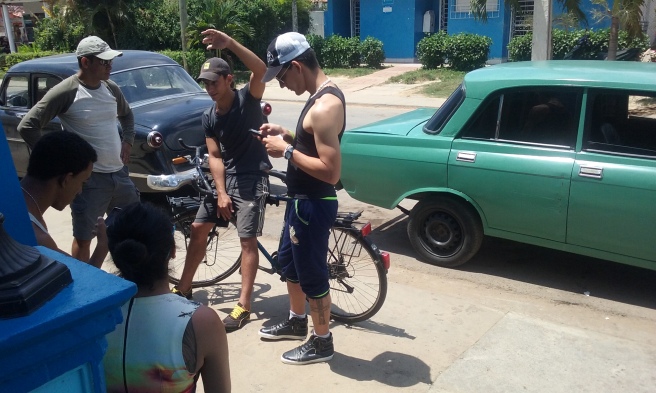 Despite the fact that 60-70% of Cubans are considered Catholic, only 4% practices it. The rest of people believes in Santeria – Afro Cuban religion. San Lazaro, the old guy who protects Cubans, has his place in every house – even mine. Cubans give him wine, cigars, food and money to make him happy and ask for protection. I will write more about Cuban religion soon. People who consider themselves Catholic believe more in “brujeria” than in God.

Cubans have this really basic sense of humor. I really had to get used to it 🙂 It’s a sense of humor in style of “Dumb and Dumber” movie. Sometimes I just don’t know why Fidel is laughing so much…At the beginning I felt bit irritated but now I just accept the fact I’m married to a Cuban and this is how my life will look like 😉 And the differences make our life spicy, funny and not boring at all 🙂

3 thoughts on “🇬🇧 Some Cultural Differences Between Cuba and Europe”